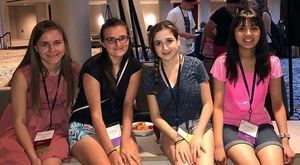 The enzyme OTC combines carbamyl-phosphate that is produced by CPS1 with an amino acid called ornithine to make citrulline. Patients with complete OTC deficiency (the most severe type of this disorder) rapidly develop high levels of ammonia in the blood soon after birth and develop symptoms any time before one week of age. Infants who are successfully rescued from this first crisis are at risk for repeated episodes of hyperammonemia. The OTC gene is located on the X-chromosome. Males have only one X-chromosome, while females have two. Hence, the majority of patients with severe presentations of OTC deficiency are males. Females with one “abnormal OTC gene” and one “normal OTC gene” may not show any clinical evidence of the disorder; however, 15% can show some symptoms or signs of the disease. Patients with partial OTC deficiency (milder type of OTC) can present at any time of life with a triggering event such as an infection or other stress. The rise in ammonia levels is generally lower in females with this disorder as compared to the males. OTC deficiency is typically suspected based on symptoms and biochemical tests, but a definite diagnosis requires genetic testing or enzyme testing of a liver biopsy.

CPS1 is an enzyme that is important for the first step of the urea cycle that converts ammonia into a compound called carbamoyl-phosphate. Patients with complete CPS1 deficiency rapidly develop hyperammonemia soon after birth. Patients who are successfully rescued from hyperammonemia are at risk for repeated episodes of hyperammonemia. Patients with partial CPS1 deficiency (milder type) can have symptoms appear at any time of life with a triggering event such as an infection or other stress. CPS1 deficiency can be suspected based on biochemical tests done on blood and urine, but a definite diagnosis requires genetic testing or enzyme testing of a liver biopsy.