Supporting the Fight to Conquer UCD

It’s just starting to sink in how much UCD awareness was raised during three NCAA basketball events this November -- the NUCDF Basketball Challenge in San Diego, and Hoops for Hope Classic and Hardwood Tournament of Hope.  It’s pretty astonishing to think that thousands of people heard about UCDs through reports about the tournament on radio broadcasts, print and web media, including CBSsports.com, the Wall Street Journal, Fox News, ESPN2 and the college team sites.  We are deeply grateful to the Strohm Family and Plan BC3, the players and their families, and the coaches and athletic departments of the top college teams that participated in the tournaments for being on “our team,” and giving national attention to our cause.  We appreciate their support and the generous support of the tournament sponsors that understood the vision and are helping to save lives. 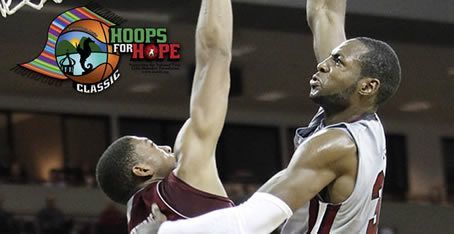 A little background on the vision for this effort:  Jeff Strohm was an NCAA assistant coach at Western Kentucky when two of his daughters were diagnosed with UCD. The Strohms connected with NUCDF for information and support and were able to attend our annual conference.  Once the family settled into life with UCD, Jeff approached us with the idea of raising UCD awareness and support for NUCDF at basketball games, and “Shoot for a Cure” was born. The first tournament was part of the NCAA Cancun Challenge held at Vanderbilt University in Nashville 2008.

Jeff ultimately ended up back in St. Louis, Missouri and, with his brothers and sisters-in-law, formed Plan BC3 to organize NCAA college basketball tournaments. Jeff and his family committed to dedicating the tournaments to benefit NUCDF and raising awareness of urea cycle disorders. We hope to save lives by informing the public of the existence of urea cycle disorders and the common misdiagnosis as sudden infant death, sepsis in newborns, autism, ADHD, bipolar disorder and even stroke.

The 2012 NUCDF Basketball Challenge was just completed in San Diego at Jenny Craig Pavilion November 14-18, hosted by the University of San Diego of the West Coast Conference.  The prestigious tournament included teams from Northern Kentucky, Tulsa, Cal State Northridge, U of San Diego and Sienna.  The games were broadcast on radio and TV locally in San Diego - raising a lot of awareness in the public about urea cycle disorders and our fight save lives.

The NUCDF Hoops for Hope Classic launched last year in New Orleans.  This year's 2012 Classic began with top men’s college teams playing at US sites hosted by SMU, U of Arkansas Little Rock, Missouri State and South Carolina on Nov 11, 19 and 21. The final games of the Classic moved to Puerto Vallarta Thanksgiving weekend, debuting in the new state-of-the-art Puerto Vallarta International Convention Center. Over the seven days of the two tournaments, at the beginning and end of every game (13 women’s, 7 men’s), during each time out and halftime, veteran game announcer Matt Piescinski provided public service announcements about urea cycle disorders and NUCDF’s fight to conquer UCD. It was a surreal experience seeing our CureUCD logo on the marquee at the stadium and emblazoned on the basketball court, and hearing Matt talking about our fight to save lives. Matt gave us a voice -- and became a wonderful champion of our cause.

The women’s teams began arriving in Puerto Vallarta on Sunday, November 19 for their three-day tournament, the NUCDF Hardwood Tournament of Hope. Oregon State, Mississippi State, U of Louisville, U of Central Florida, Gonzaga and Missouri State played exciting matchups. Congratulations to University of Louisville for taking home the NUCDF Hardwood Tournament of Hope championship trophy.

We invited two UCD families to the tournaments to represent our families with me. Ximena and Andres came from Mexico City, bringing their beautiful 2-year-old daughter, Nicole, who is affected with OTC deficiency. Katie Stavas joined us from California. Katie is the daughter of Jim Stavas, a 52-year-old fire captain who slipped into a coma after an undiagnosed UCD was unmasked by a simple sinus procedure. Jim suffered severe brain damage and passed away 18 months later.  We hold our NUCDF Cure the Cycle biking event in California in Jim’s memory to raise support and UCD awareness.

Ximena, Andres, Nicole and Katie were introduced during halftime at the women’s games and little Nicole became the darling of players and coaches alike!  Nicole struggled a bit to stay stable with her OTC deficiency the first two or three days of the trip.  As all our UCD families understand, the stress of a trip, combined with difficulty staying on feeding schedules while away from home, heat and dehydration can trigger unstable ammonia levels.  With increased calories and plenty of hydration, she was able to enjoy the beach and the kid’s pool at the hotel for an hour or so each day, but we kept a close eye on her, watching for any signs of elevated ammonia.

The men’s teams started arriving in Puerto Vallarta on Thanksgiving Day for the NUCDF Hoops for Hope Classic.  The first game between Jacksonville University and Rider was played on Friday, followed by an outdoor banquet for about 400 people, including the players, coaches, staff, families and fans. The dinner program included NUCDF videos shown on two large screens, followed by Andy Strohm (Jeff’s brother) and myself speaking about the goals of the tournament, NUCDF and our fight to conquer urea cycle disorders. I pointed out that UCDs can strike anyone out of nowhere -- and that several athletes have died after an undiagnosed UCD was triggered by high protein diets, supplements and excessive exercise.

Andy surprised me with the announcement (and choking me up) that a memorial tribute award in the name of my family’s beloved Tyler was going to be presented to the most inspirational player in the tournament. Tyler was one of the first infants to be rescued from a catastrophic coma due to neonatal-onset UCD back in 1994. Tylerand battled for 7 years, passing away in 2001. The award recognizes Tyler for paving the way for increasing the understanding of urea cycle disorders and pioneering new treatments during his life. The Tyler Dunn Award will be an annual recognition presented each year to the most inspirational player in the Hoops for Hope Classic.

After the banquet, several players and coaches approached me to introduce themselves and express how inspired they were by our cause and our heroic kids and adults fighting UCD.  One of the players was interested in pursuing medicine and become involved in research. The interest and positive support we received was overwhelming and I felt very blessed to meet so many wonderful and caring people.

Over the next two days, the men’s teams battled for the championship.  University of South Carolina took the finals in a hard-fought game over University of Arkansas-Little Rock. I had the pleasure of presenting the Challenge trophy to the team, and plaques to the outstanding players in the tournament.  Congratulations to U of South Carolina, and to all the players who were named to the All-Tournament Team!

I think I speak for all our UCD families when I say that we are deeply appreciative of the support of the Strohm Family, Plan BC3, the players, coaches and their families, athletic departments and sponsors, and express our heartfelt thanks for using their time and talents to help raise UCD awareness, and for being on “our team.”  We know that precious lives will be saved because of their help.  We’re looking forward to next year!

For final report and scores: 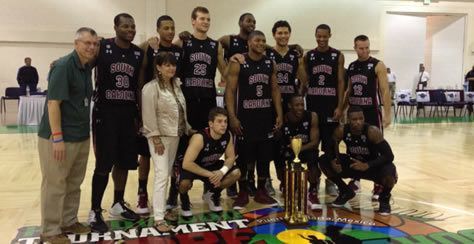 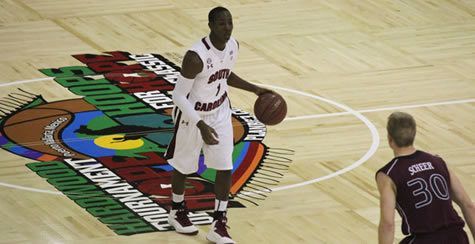 Our Dream is for a Cure, and we can't rest until we find it...

Hoops for Hope - All Tournament Team

Nicole and her parents.